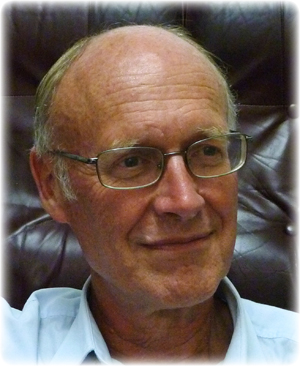 Andrew Neaum was born in England in 1945. His father at the time being a country parson in Staffordshire. In 1952 the family went off to live on "the loneliest island in the world," Tristan da Cunha, in the South Atlantic Ocean, where for three and a half idyllic years Andrew's father was Anglican Chaplain.

Returning for nine months to England, the family then moved to what used to be Southern Rhodesia and which now is Zimbabwe. There Andrew's father was a mission priest for seven years, moving to a suburban parish in the capital city, now Harare, when the time came to put Andrew through university.

At University Andrew took a BA Honours degree in English, did a Postgraduate Certificate of Education and taught in a Rhodesian school for two years. He then went to London where as well as teaching for two more years he offered himself to the Bishop of Mashonaland for training as an Anglican priest. He was selected as a suitable candidate at an ACCM conference in England and flew to Grahamstown in South Africa for his theological education.

He was ordained deacon in December 1974 in St Mary's Church, Highlands in Harare, his father's parish church, was posted to the Cathedral in Harare, where he was deacon and then assistant priest for three years, married Margaret in April 1975 and was priested on the 17th August in the same year. He was Rector of All Saint's Gatooma, now Kadoma, from the 14th November 1977 until the 30th April 1982

He then became Vicar of St Paul's Cathedral on the Island of St Helena and was also Archdeacon of the Island from May 1984 until his departure in August 1985. After furlough in England he emigrated to Australia, becoming Rector of Skipton, near Ballarat, in December 1985, Rector of Ararat, also near Ballarat, in 1989, Rural Dean of the Wimmera in 1991, Canon of Christ Church Cathedral Ballarat from 1993 until he left the diocese to become Rector of Wodonga in 1995 and was made a Canon of Holy Trinity Cathedral Wangaratta in 2002.

Toward the end of 2003, he was inducted as Rector of the Parish of Shepparton. There he remained until his retirement at the end of May 2013, the longest stay anywhere in his life. During his time in Shepparton Margaret contracted lung cancer, a fate she accepted with courage and faith, dying peacefully at home in January 2009. A year and a half later Andrew took all his long service to visit England, Tristan da Cunha and Zimbabwe. While in England he met again Diana Houghton, the widow of a friend and fellow priest while both of them and their families were on the Island of St Helena. He and Diana were married in Surbiton, England in August 2010. They visited Zimbabwe, South Africa and Lesotho together before returning to Shepparton. In 2012 they visited Tristan da Cunha, Andrew acting as Rector for a memorable three weeks. On his retirement he and Diana took six weeks to travel back to Europe and England freighter to take up a "House for Duty" post in Hampshire in the Diocese of Winchester. From August 28 2o13 he will have oversight and the care of St John the Baptist, Boldre with St Nicholas, Pilley on the edge of the New Forest, a few miles north of Lymington.